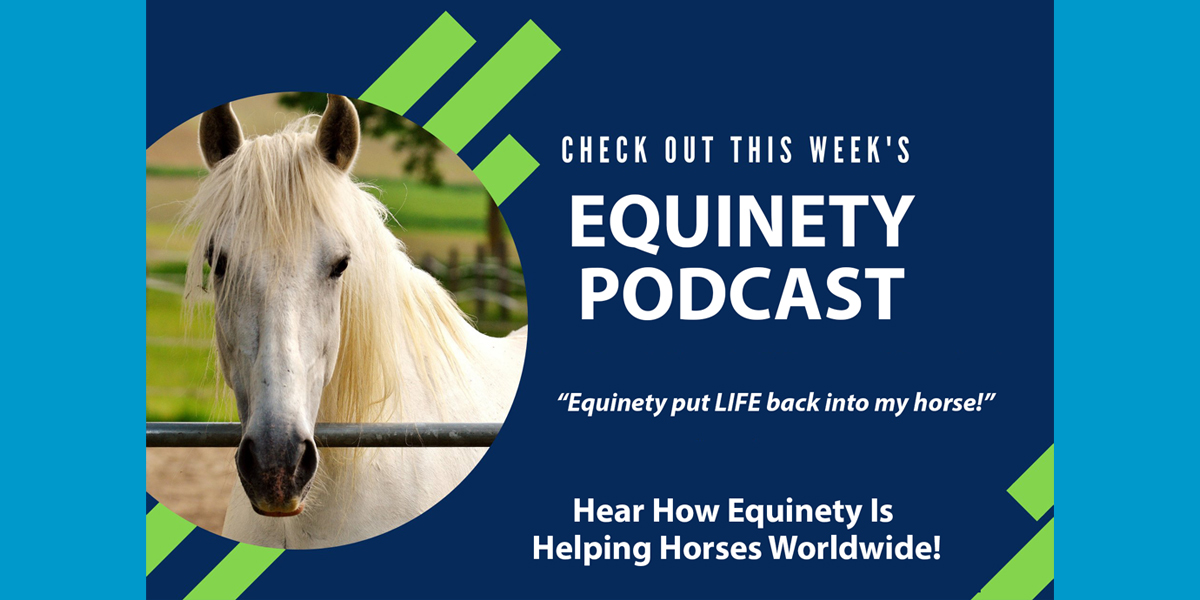 John Dowdy:                 All right. Hello and welcome to another Equinety Podcast. This week we're going to have Rheanna Wolk on from Missouri. Which by the way, for those of you who don't know Missouri, would be the Show-Me State and And Rheanna, let's just get right into this. Welcome to the show.

John Dowdy:                 Well, it's great to have you. And with Missouri being the Show-Me State, and I understand, and we'll get a little bit more into this with one of your horses that you have tried every supplement, or possible thing that could help your horses with abscesses. The Show-Me State definitely comes into play when you found the Equinety product.

Rheanna Wolk:             Okay. Yeah. When we would go out to take care of the horses, he would have major leg cramps in the one leg. And after seeing the ads, I thought, "Well, we should try this and see if it helps his cramping." He was on it for probably six weeks, and his cramps still were there, but he got really shiny. In the meantime, I thought I would try it for the other horse who has had many abscesses in the past, and thought I would use it as a preventative.

John Dowdy:                 Right. So with your Fox Trotter, and this happens, I would say not that often, but because the Equinety is amino acids, and what it's specifically doing is stimulating the pituitary gland to release the necessary hormones, which help the body heal at a cellular level. So what you found with your Fox Trotter in over a six week week period, that he was still having the cramps. So it didn't help in that area specifically, but what you did find, his coat was soft and shiny. His overall build and everything was filled out and looked really good from that aspect.

John Dowdy:                 Okay. And at the same time, and then this is really going to be the meat of the story of this podcast, is your 29 year old who has had a plethora of issues through his life. So give us a little background on him. Because although this wasn't the initial reason why you purchased the product, you thought, "Well, what could it hurt? We'll give it a shot and see what happens." But tell us a little bit of the history and the issues that you've dealt with with him.

Rheanna Wolk:             Oh yes. Several years ago he ended up getting an abscess, and the vet came to check him and he said he's just prone to these sort of infections, and things, and that I would be dealing with this a lot. So we tried so many different supplements, and different things that I found on the internet and in catalogs, and nothing ever seemed to work. So while my Fox Trotter was on this, I thought I would try the other one on Equinety. And he was getting really perky and acting a lot better. And I was noticing a huge difference with him. Unfortunately, I let my supplement run out.

Rheanna Wolk:             When I ended up getting the Equinety in the mail, I started giving him the supplement. And at that point his abscess had already showed itself. So usually it takes him two weeks to recover from an abscess, or more. He just is down for a very long time with this ailment. And after starting him back on the supplement, after having the gap, he recovered in two days, which just completely blew my mind.

Rheanna Wolk:             Yeah, it made me a true believer. Before I thought, "Well it's at least making them shiny and soft", but until then, this just proves that it does work.

John Dowdy:                 Right? Yeah. Because in dealing with abscesses, I know there's a lot of people out there and that horses can be prone to this type of thing. And your horse is out of commission. And we've had a couple of their podcasts dealing with abscesses along with several other issues. And one of the reasons I was excited about this one is because this was one of the main things that you've been dealing with for quite some time. Not to mention the fact that he's 29. And as you put it earlier, to me, he's just kind of existing. So tell us about that. He is 29, so he's not really interacting with the other horses or anything, just kind of is there.

Rheanna Wolk:             Right. Yeah. He just didn't seem to have an interest in anything in life, or even sometimes eating his dinner. So when he started on this, he just started getting perkier. He started actually, if the other horses took off trotting up the field, he would join them. And I haven't seen him trot in years. So this kind of gave him a entirely new recent life. So it's been neat to watch him just transform under the supplement. And it hasn't even been that long that he's been on it. But I'm a believer and I'm going to keep him on it.

John Dowdy:                 Right. So he's been on it now about four months. And now in addition to the abscesses and things like that, and although you haven't had him tested, he has shown signs of Cushings. What are some of the other ailments and different things that he's dealt with?

Rheanna Wolk:             Just loss of muscle tone. He's had a lot of... in fact, every year we've had to almost shave him with his longer hair by spring time. And he's just not progressing the way other horses in the field are progressing with him with throughout the year. But with this, he's back to having shorter hair, he's soft, he's perky. He looks great.

John Dowdy:                 Well let me ask you this question. How often was he getting abscesses prior to Equinety, and then now that he's been on Equinety?

Rheanna Wolk:             He would get roughly two a year. And it seemed like every spring and every fall something would happen. And I figured it was probably going to happen by spring time, and here I let Equinety drop of his supplements. And as soon as I do, and then of course he started to develop one. But I'm so glad that I was able to jump on that, and get it back on track. Because he just recovered from that so quickly.

John Dowdy:                 Yeah, within two days. Well, I tell you, for those listening in for the first time, if you're battling, trying to figure out maybe a possible solution for your horse that has abscesses. And again, we've got a couple other podcasts talking about this, you might want to give the Equinety a try, and take it from Brianna out of Missouri. The Show-Me State. A true believer now, would you say?

John Dowdy:                 Great. That's fantastic. Well, Rheanna from Missouri. Thank you so much for taking the time to share your Equinety story, and please keep us updated.